Vietnam Motorcycles Market trend is uncertain. The effects of shortage in components and first price increases on final products seems to start hitting the market during the second quarter, when sales were +0.4% in April and -8.2% in May.

In the 2022 the Vietnamese motorcycles market was expected to a double-digit growth to recover after tumbling down during the last three years decline at the lowest level out of the last 15 years.

Reasons behind the last year fall are still in place, with the supply chain disruption caused by covid and raw material shortage, which hit all industries in the country, including the two wheeler (one of the biggest).

The situation further deteriorate in the first quarter 2022, when price inflation added its negative impact in the industry.

However, the final figures for the first quarter have been marginally above the correspondent period last year, with sales up in each single month and quarterly sales at 813.727 (+5.7%).

The effects of shortage in components and first price increases on final products seems to start hitting the market during the second quarter, when sales were +0.4% in April and -8.2% in May. In the first five months of the year, sales have been 1.33 million (+3.7%).

Vietnam is the second largest electric vehicles market after China and data confirms the trend with L1 segment up 24.7% after five months 2022 and L3 up 30.6%. 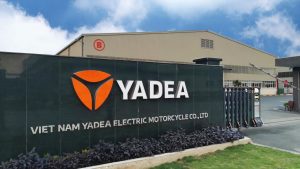 Unique in the ASEAN region, the Vietnamese two-wheeler market already started the electrification transaction, following the pathway shown by the Chinese market.

Dominated by Japanese manufacturers which have colonized the country creating a huge hub for domestic and export with over 3 million annual sales, in the last five years several new local venture started up solicited by government subsidies and focused on electric mopeds or scooters.

They gained terrain and power with the landing of Chinese giant Yadea (2019) aggressively targeting the students and first bike purchaser in general while directly attaching the establishment, even with comparative advertising.

As consequence, all automotive parts imported into Vietnam for use in domestic assembly/manufacturing (including input material imported for use in the domestic production of automotive components) are to be exempt from import duties provided that such items are not also available from domestic suppliers. In order to qualify for this entitlement, imported goods must not have been merely assembled without having undergone a manufacturing process prior to their import.

Actually the locally available production for electric two wheeler already exceed the 1 million per year, while there is not yet demand for such a volume although the EV segment is growing at a +50% pace.