Due to the harsh 2 Wheeler industry in India, all the local manufacturers struggled in the 2021. However, Royal Enfield was able to navigate well and deliver a double digit increase compared with the previous year.

Royal Enfield is the most global acting Indian manufacturer and the only one active both in North America and Europe, with remarkable performance.

In the Indian region, the manufacturer is penalized by the still strong covid19 presence in India (sales +11.3% vs 2020), but even by the block to import in Sri Lanka (-92% vs 2019), while sales have been positive both in Bangladesh and in Nepal.

In all other regions, sales are growing very well.

Sales are going up even in North America, Asia and Pacific regions while only in the ASEAN the brand is hit by the local industry decline.

Royal Enfield is a company 100% controlled by the Indian conglomerate Eicher. Located in Chennai (India) is among the largest motorcycles company worldwide. The history of this company started at the at the beginning of the 20th century. Indeed, in 1901 Royal Enfield brought to the market its first motorcycles.

In 1952 Madras Motors receives an order from the Indian Army for 800 350cc Bullets. At the beginning of 1953, the shipping arrived in India and they proved to be a great success because of their hardy and easy to maintain aspects. Johnny Brittain won the prestigious Scottish Six Days Trial on his 350cc Bullet, “HNP 331”.

In 1955 the Redditch company became partner of Madras Motors and they founded ‘Enfield India’. They engaged in the construction of a purpose-built factory at Tiruvottiyur, near Madras.

In 1956 the Tiruvottiyur factory opened and Bullets began to be manufactured under license. The early production was based on machines that came from England in sets subsequently assembled in Madras. A total of 163 Bullets were built by the end of that year.

In 1964 the iconic Continental GT café racer was launched to great acclaim when a team of photojournalists ride it from John ‘o Groats to Lands End in under 24 hours, by way of 7 laps at the Silverstone circuit. The GT featured a racing petrol tank, clip-on handlebars, rear sets, a humped race seat, rev counter and a swept-back exhaust.

Production of motorcycles ceased in 1970 and the original Redditch, Worcestershire-based company was dissolved in 1971.

Enfield of India continued producing the ‘Bullet’, as “Enfield Bullet”, due to dispute around the legitimacy of using the “Royal” nameplate. Finally, in the 1999 a lawsuit over the use of ‘Royal’, brought by trademark owner David Holder, was judged in favour of Enfield of India. The brand “Royal Enfield” was back in the market with the Bullet 350 and the new models designed and produced in India, including Cafe Racers, Cruisers, Retros and Adventure Tourers. 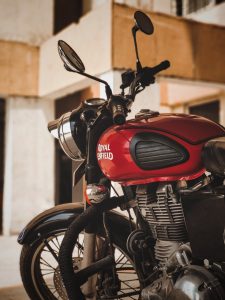 In 1977, Royal Enfield was back at home because of Indian companies export of the 350cc Bullet to the UK and Europe. Sales grew rapidly as the bikes developed, followed by classic British motorcycle enthusiasts.

In 2013 Royal Enfield commenced to manufacture at its second facility at Oragadam, Tamil Nadu. With increased capacity, the state-of-art factory will be the nucleus of the company’s global ambitions in the future.

In 2014, Royal Enfield introduced the possibility of a new retail experience by opening the first-of-its-kind exclusive gear store at Khan Market, New Delhi.

In 2015, Royal Enfield set up its first direct distribution subsidiary outside India, in North America. Royal Enfield’s North American headquarters are located in Milwaukee, Wisconsin. Actually they see nearly over 2.000 units per year.
In 2016, Royal Enfield launched the Himalayan. With the all-new LS410 engine and terrain-tested suspension, it was promising the ride of a lifetime on all roads and no roads.
In 2017, Royal Enfield moved into its fully operational Technology Centre in UK at Bruntingthorpe Proving Ground, Leicester and started to produce from its third manufacturing facility at Vallam, near Chennai.

Everything You Need to Know Before Buying a Motorcycle