Hero Motors Corp. Global Sales have been almost negative in the 2021 reaching 5.1 million, down 8.4% from the previous year and over 3 million units down from the 2018 peak. International operations count 5.5% of the total, but most are concentrated in the Bangladesh and Nepal.

Following the huge sales lost reported in the 2020, with over 1.3 million down from the previous year, Hero Motor has not recovered in the 2021, due to the hard second half for the domestic Indian market, reaching a global sales level down 27% from the all-time record established in the 2018.

After a moderately recover posted in the first quarter (+ around 200.000 sales) in the second quarter the Indian company kept struggling and after an “easy” comparison towards the 2020 near-to-zero sales reported in April and May, in June the performance was again awful with sales declining near the half compared with the 2020 and two-third compared with 2019. Unfortunately this negative trend was on in the entire second half, when the Indian market (see our report here) declined over any expectations.

Hero Corp. second half was really negative with sales down 22.2% year-on-year, due to the very low demand in India, where Hero is market leader.

The firm is market leader in India and based the 2014-2018 success on the domestic dominion. However, now the slow speed in gaining sales in the international market is a sharp weakness, even compared with other Indian manufacturers.

Global Sales in 2021 have been 5.1 million, down 8.4% from the previous year and over 3 million units down from the 2018 peak. International operations count 5.5% of the total, but most are concentrated in the Bangladesh and Nepal.

The company is now focusing to expand activity in Latin America and 2021 sales in the region grew up 63.2%. But numbers are still negligible. Hero exports even in 11 countries in Latin America, but actually with a marginal rule in the market.

In 2021 Hero Motors speeds up the EVs plans 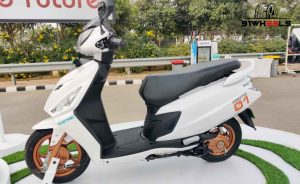 In a livestream at the company’s 10th anniversary celebrations, Hero MotoCorp chairman Mr. Pawan Munjal showcased the company’s upcoming electric scooter, which looks to be near-production-ready.

In April this year, Hero inked a strategic partnership with Taiwan-based Gogoro to develop the EV and charging network in India. Meanwhile, it is also working on its very own electric two-wheeler, which has been co-developed at its R&D centres in Germany and CIT, Jaipur, ready alongside its project with Gogoro.

While the company has not revealed any details about its first EV, the teaser reveals a 12-inch wheel at the front and a 10-inch unit at the rear. The rear wheel also doesn’t appear to have a hub-mounted motor. Interestingly, it is also equipped with a single-sided swingarm, similar to the Bajaj Chetak. This is unlike the conventional double-sided ones found on Gogoro EVs in Taiwan.

Hero’s electric scooter also doesn’t share any major styling elements with the Gogoro electric scooters, so we assume this project started before the partnership. The vehicles looks in line with “traditional Indian market and not innovative. The launch is expected in March 2022 and few months later the arrival of the first line up produced with Gogoro will probably immediately aged this one.

In the 2011, the Munjal family holding, Indian Promoter Group, and Honda Motor Co Ltd Japan (Honda) entered into a Share Transfer Agreement to transfer the entire Honda’ shareholdings of 26% in the Company to the Indian Promoter Group bringing an end to the joint venture between the two promoter groups of the company.

The acquisition was completed on March 22 2011 and the shares held by Honda were transferred to the Indian joint venture partner. In addition to the Agreement the Indian Promoter Group and Honda also entered into a License Agreement which has given to the company the right and license to manufacture assemble sell and distribute certain products and their service parts under their Intellectual Property Rights.

In July 2011 the company changed their name from Hero Honda Motors Ltd to Hero MotoCorp Ltd.

In 2015 the company commences operation in their first ever plant outside India established in Villa Rica Colombia.

On 10 March 2016 Hero formally inaugurated its world-class `Global Centre of Innovation and Technology’ (CIT) in Jaipur Rajasthan. Built with an investment of Rs 850 crore the CIT will design and develop world-class products for global markets

On 12 January 2017 Hero launched new Glamour motorcycle in Argentina its first-ever global launch of a new product outside India.

In May 2017 Hero commenced commercial production at the second global manufacturing facility in Bangladesh. On 7 November 2017 Hero unveiled the Xpulse Concept motorcycle as a world premier at the EICMA annual trade show in Milan Italy.