Italian scooter & motorcycles industry is in a great shape. During the Q3 sales declined vs the previous year – when the market was exaggerating high – but less then expected and year to date September figures were 257.246, +25.7% vs 2020 and +17.2% vs the 2019, the highest level in a decade.

The Italian motorcycles market is in great shape, fueled by the new demand for individual mobility which already supported the market last year.

The high level of registrations reported in the Q4 2020, related to the manufacturers push to register high volumes of euro4 models, no more sellable from January this year caused an almost negative start of the year with both January and February below the previous year sales level. However in March sales boomed  and the first quarter started very well.

The second quarter was better than expected and even June was ahead of the correspondent 2020 performance, at the highest month in a decade.

However, the sign of market wellness is the 20.0% increase over the correspondent period in the 2019, in the pre-covid era, projecting the total year at the highest level in this decade.

Thanks to this data, Italy has been the largest European country so far this year, ahead of France.

Following five years of growth, the Italian Motorcycles industry reported in the 2020 a moderate lost. Following the sharp lost reported in March and April, the market recovered for all the rest of the year, while not being able to match the 2019 volumes.

Although economic activities in Italy have been penalized by the lockdowns during the entire Q4, the industry was able to keep life the relation between dealers and customers, with a rapid growth of on line activity and even the last quarter was better than the correspondent period last year.

Indeed, the main reason was the strong rebates offered to run out euro 4 models, applied by few brands like, Benelli, Kawasaki, Fantic Motor, Peugeot, before the January 1st 2021 deadlines for these models and the introduction of Stage 5 emission level.

Looking at the emerging segment of electric models, the best seller this year is Silence landed this year in the market and already first with 2.972 sales, well ahead of the former leader, the Italian Askoll with 2.770 (+14.7%) and the recently launched Chinese NIU with 1.712 (+91.9%). 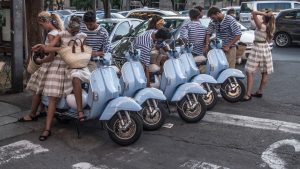