Only 12 months ago, Triumph announced a restructuring plan, “forced” by the pandemic, cutting around 10% of the workforce UK based. A good move, considering that in reality last year sales slipped only 2% before to take off in the 2021 and a great deal for the owners, as revenue and profit climbed at the all time record, in the first year just ended (Triumph fiscal year is July-June).

Having only recently started up operations in China (with immediate strong performance) sales in Asia took off, adding success to the outstanding score reported in USA and Canada. Sales are fast growing in India, Turkey, Malaysia, Vietnam.

Just in Europe the performance stands at a “normal” +25%…

Recent years have been full of success for Triumph. The British brand have an annual production capacity of 60.000 bikes and in the period 2013-2017 grew uninterruptedly to achieve a record of over 61.500 units.

During 2018 and 2019 global sales slipped down a little with 2019 score at 59.600 units, while the manufacturers was planning to expand volumes in the 2020, exploring opportunities in Asian region.

However, during the second half of the year a robust recovery allowed to the British manufacturer to recover almost all the lost ending the entire year with 56.249 global registrations, down a mere2.9%,

In North America sales declined marginally while in Latin America fell sharply (-19%), like in the ASEAN (-26%) and in the Pacific area (New Zealand and Australia) losing 18.7%. 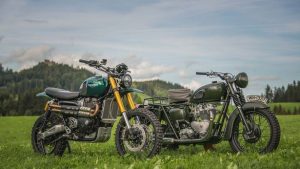