Indonesian Motorcycles Industry is struggling hard. The first half sales, which this year have been 2.5 million, report an increase of 30.6% vs the correspondent period 2020, but down a deep 24.6% vs the 2019.

The recent releases National Economic Recovery Program aimed at strengthening health care capacity and providing financial support to vulnerable households and businesses. The central bank supported these efforts by purchasing government bonds in the primary market, an exceptional but appropriate and temporary move that has ensured financial market stability. To support this plan, Indonesia temporarily suspended its pre-pandemic budget deficit ceiling of 3 percent of GDP until 2023.

However, following the incredible 2020, one of the worst year in the Indonesian motorcycles industry, the new year started again with an almost negative first quarter, with industry sales down in double digit.

In the second quarter the sales speed improved, while remaining quite far from the pre-covid level. Considering the sales in Q2 2020 dropped to only 320.000, in the 2021 the 1.18 million sales represented a huge increase.

The Indonesian market, the third globally, is hit by low production level caused by safety measures and consumer goods demand in the country is below the expectations, again due to highest than expected covid 19 impact.

Market leader is again Honda improving volume from the previous year by one fourth, while the first followed, Yamaha increased sales 41.4% and both Kawasaki and Suzuki improved near 80%. 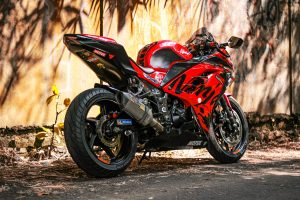 Malaysia 2021. Following a tremendous first half the motorcycles market will slow down