The Vietnamese motorcycles market started the 2021 keeping the slow pace started in the second half last year, confirming our expectation for a not immediate recovery of high sales level.

Already few years ago the government announced the target to shift 100% motorized two wheelers park from ICE to EVs by 2030, as not delayable action to fight against pollution. Vietnam was ranked the 15th most polluted country in the world in 2019, according to IQAir, an air quality technology company.

However, not serious steps have been done in this direction before the arrival of Covid 19 pandemic, with local producers perched to defend their margins in the current ICE line up not introducing any electric model for sales.

The 2020 represents a sharp corner point. The market has been hit by the multiple effects of the pandemic, although the government has proved high ability on controlling the evolution, and sales fell down as in the entire region, more for the economy decline due to the fall of tourism and export, than for lockdown measures.

While the market declined sharply, the growth of electric scooter manufacturers has been strong with local brands growing on the path created by VinFast and with the landing of giants, like the Chinese Yadea, which started local productive operations.

The champion of them is the local manufacturer VinFast, producing only electric vehicles both in the two and four wheelers, which started up only two years ago, already achieving dramatic results, with over 10k sales per month.

Therefore, in the 2020 the total two-wheeler market fell 14.4% ending at 2.84 million sales, first time below the 3 million units after over a decade.

While losing share under the emerging e-scooter manufacturers, Japanese are still dominating the scene, with Honda undisputed market leader with 2.1 million sales (-14.7%9 followed by Yamaha with 471.527 (-16.7%) and VinFast able to sell already more than 100.000 e-scooter in a single year, over doubling the 2019 level, in the second year of operativity and with a new plant under building to feed to strong demand. 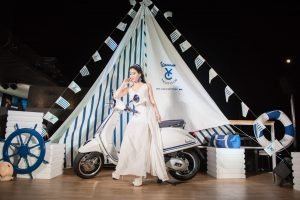 Indonesia 2021. Honda struggles in a Market losing 17% in the first quarter