Japanese Motorcycles Market is showing further progress after the previous month rebound. Indeed, July sales grew faster, pushing the trend up 6,7% with registrations at 39.036 units. The full year 2020 outlook is projected at 384.344 units, up a shy 0,4%.

July motorcycles market, keeping the positive trend, is gradually improving its performance. While consumers’ demand is partially affected by the slow economic recovery, monthly sales grew a 6,7% with 39.036 registrations.

Despite the progress during the last two months, Year to Date July outcome is still negative (-4,1%) with registrations at 218.494 units.

Following the low record hit in the previous year, the worst out of the last 50, the Japanese motorcycles domestic market was steady in the first quarter 2020. A moderate decline was reported with 84.558 sales, down 3.2% from the previous year.

In April sales declined 6.8% before to become really negative in May, losing 25.6%.

In June the market was back on a positive path. Motorcycles sales reached 35.369 units, recording a +5,1%. This positive outcome is related to the government action to support domestic consumption and small and medium-size businesses affected by Covid19.

In 2019 the motorcycles market hit the new negative record

Following the progressive decline reported during the recent years, with 2018 hitting the lowest sales level out of the last 50 years, in 2019 the Japanese domestic market hit a new record low, with only 382.913 vehicles sold, down 1.7% from the previous year. Indeed, Japan placed 15th in the Global 2019 ranking (not yet final).

Among importers the leader is Harley-Davidson, despite losing 1.6% of sales. The fastest growing brand is Husqvarna, recently landed in the market, growing 99.6% from the previous year. 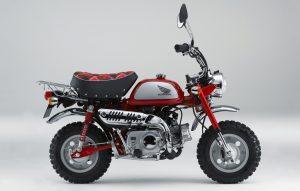 Reasons behind the decline

Before explaining the factors behind the inability to sell motorcycles in the country, it is necessary to first organize what type of motorcycle has ceased to sell. Speaking of motorcycles in one word, Japanese classification split models on moped, with below 50 cc or between 51-125cc. The motorcycles segments are three, the “mini bike” for engine between 125-250cc, the “small bike” for displacement between 250-400 cc, and the “big bike” with over 400 cc engines.

As said, the current number of domestic sales felt to nearly 10% of the heyday, but the most of the fall is concentrated in the moped segment. In the early 80’s, when motorcycles were in its heyday, scooters that can be driven with feet have become popular as a substitute for commuting, attending school, and shopping. At the time, mopeds boosted sales at over 2,8 million units in a single year, along with Honda’s Super Cub 50, which was widely used as a commercial motorcycle for newspaper delivery and home delivery.

In the following decades the small two wheels, with speed limit of up to 30 km / h, sales have gradually fallen due to the following reasons:

The 50cc was an icon in Japanese motorcycle manufacturing. Honda was founded in 1948 on the success of the two-stroke, 50cc A-Type auxiliary bicycle engine, nicknamed the “Bata-Bata” for the sound it made.

That was followed a decade later by what would become the most-produced motor vehicle in history: the Super Cub. Set to surpass the 100 million-unit milestone this year, it originally sold with a four-stroke, 50cc engine. Now it is available in a variety of engine sizes within more than 160 countries. The 50cc version remains only in Japan.

The final nudge toward extinction coincides with the imposition of tougher environmental regulations. Japan, like other nations around the globe, has adopted European Union vehicle-emissions standards as the basis of its own. Those regulations started solely as limits on pollutants in exhaust. However, the fourth version requires on-board self-diagnostic systems that run engines cleanly for at least 20,000 kilometres (12,427 miles). The new regulation contributed to the purge of models such as Honda’s Z-Series and Little Cub.

The fifth iteration, effective in 2020, extends that requirement to the life of the vehicle. That should halve emissions within 20 years yet add as much as 111 euros ($130) to the cost of each vehicle, according to a 2016 study for the European Commission. That’s about 10 percent of the sticker price for some Japanese models.

Japan’s Environment Ministry discussed the new emissions standards with car and motorcycle manufacturers. The final conclusion was that it does not make sense to adopt different local standards because of the global nature of the industry.

“100cc or 50cc bikes are probably going to disappear,” Osamu Suzuki, the company’s 87-year-old chairman, said during the May earnings presentation. “125cc or 150cc will probably become the lower limit for small vehicles.”

Turkey. In the first half 2020 the motorcycles industry was resilient...