Aprilia global sales performance in the 2020 is almost negative with year to date May sales down 37%, due to the robust fall reported in India and Europe. The second half outlook is positive the lost will be recovered but only partially.

In the last decade, while winning a long series of World Championships in all categories, Aprilia global sales performance was not positive.

Indeed, while the other premium brands have expanded their presence in the World with growing sales, Aprilia have lost terrain from the 82.583 sales reported for the 2012 to a negative peak hit in the 2015 at 43.600.

Since the 2016 a recovery path was taken and sales grew up for four consecutive years ending the 2019 with 69.000 units.

Indian region is the largest, with 36% of global sales followed by Europe with 27%.

Please bear in mind these data reflect the actual global coverage for McD. While it is the widest in the World, does not includes all countries. In addition, data reported must be considered preliminary as not all countries have yet provided the May update.

Aprilia was founded after the Second World War by Alberto Beggio, as a bicycle production factory at Noale, Italy in the province of Venice and started the production of motorcycles in the 1968, when his son Ivano took over the company. 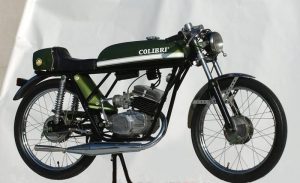 In 1970, the company would seal its fate with its first motorcycle, the 50cc Scarabeo motocross bike. This model, in formats varying from 50cc to 125cc, set the stage for later racing motorcycles Aprilia would produce. Even in 1970, Beggio dreamed of taking the company’s bikes to the competitive racing circuit.

That dream became a reality when Aprilia manufactured the RC 125 in 1974. Maurizio Sgarzani rode this model in cadet class the same year. In 1975, the company’s competitive nature became apparent with the introduction of its first motocross racing bikes. Just two years later, in 1977, success arrived with Italian Motocross Championship titles for both the 125 and 250 classes.

On the production side, Aprilia filled the void in the motorcycle market of the early 1980s with models such as the TS320 trials bike in 1981 and the ST 125 road bike in 1983. Starting in 1985, the company no longer made its own engines for all models. It instead contracted personal vehicle engine maker, Rotax, to build the engines in some Aprilia motorcycles.

In 1988 the United States began importing this brand of motorcycles. The first bikes to come to America in 1988 and 1989 were the TRX312M and The Climber, which brought liquid cooling to the production market. The well-known Pegaso 600 brought an off-road feel to street legal bikes with its introduction in 1990.

In the 1990s, Aprilia entered the urban mobility market, breaking with conventions of the time. From the company’s daring leap into this market came the Amico, the first l-plastic scooter, and the legendary Scarabeo.

The company did not turn from its roots, though. In 1998, Aprilia produced one of its most well-known models, the RSV Mille. This superbike featured a 1000 cc V2 engine. The similarly powerful sport touring bike, the Falco was also released the same year.

Since late 2004, Aprilia has been part of the Piaggio Group.